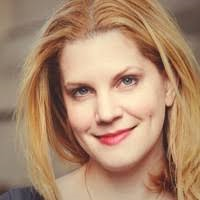 Kristin Lundberg is the performing arts/theater teacher at FVMS. Prior to joining the Bengals, she taught, directed, and choreographed large-scale plays and musicals at Rocky Mount High School, such as “Our Town”, “The Music Man”, “Little Women”, "The Wiz", and "Mamma Mia". Ms. Lundberg spent the past fifteen years in New York City working as a professional stage and film actress, playwright, producer, theater teacher and as the artistic director of her theater company, Shakespeare’s Sister Company. She has performed off-Broadway, in London and toured her production, “Muse”, in NYC, at the Mill Mountain Theater in VA and at the FMU Performing Arts Center in SC. Most recently, she played Elizabeth Bennet in the Imperial Centre’s production of “Pride and Prejudice” in Rocky Mount, NC...one of her most favorite roles to play.

Originally from Wake County and in her 14th year of teaching theater, Ms. Lundberg is a proud graduate of East Carolina University where she holds her B.S. in theater education from the school of theater and dance and Marymount College in London, UK with concentrations in classical acting, voice and stage combat.  She has been awarded a scholarship to pursue her M.F.A. in playwriting at Hollins University with a concentration in directing new play performance over the summer.  Member of the Actors' Equity Association, League of Professional Theatre Women, SAG-AFTRA, the Educational Theatre Association and the International Thespian Society.
Kristin's pride and joy is her sweet dog, Grace Marie, who is a therapy dog and made her stage debut as Toto in "The Wiz!"  Curtain up!
SCROLL TO TOP