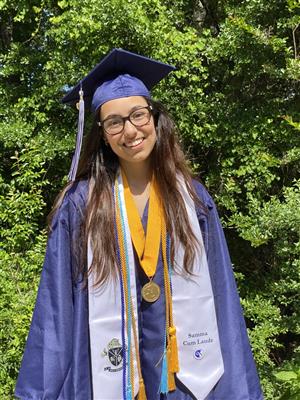 Isabella Marin didn’t know what to expect when she moved from Colombia to Raleigh with her family five years ago.

What she discovered would set the course for what is certain to be a brilliant future after graduation – starting with acceptance to Yale University and a scholarship from the Bill and Melinda Gates Foundation.

Isabella was uncertain about a lot of things when she arrived in the United States – especially how school would go. But she was pleasantly surprised.

A Setup for Success

“I never felt like an outsider,” said Isabella of her arrival at Wakefield Middle in 2015. “It was a place where I could get settled in this new life and everyone was so nice and welcoming.”

As part of an IB internal assessment Isabella wrote about a political topic, which made her realize how much she enjoyed politics.

“At Millbrook, being among peers and teachers has really helped me to figure out what I wanted to do and to do things I’ve never been able to do before,” she said. “I really began to grow from the people around me.”

Isabella’s interest in politics and encouragement from friends and teachers led to her co-founding Millbrook’s Model United Nations Club. She also enjoyed discussing historical and current politics in her IB classes, especially her Lessons of Vietnam and Recent International Relations class.

“It’s very relevant to what I find fun!” said Isabella of her participation in class and extra-curriculars at Millbrook.

All of this has informed Isabella’s decision to study Politics and Foreign Affairs at Yale, after which she hopes to work for the real United Nations in New York City or the State Department in Washington, D.C.

Isabella’s not the only one who’s leaving Millbrook for great things ahead. Several of her friends have been accepted to schools such as Duke, Dartmouth, the University of North Carolina at Chapel Hill and N.C. State.

She said that she and her friends are grateful to Millbrook and the IB program, which has prepared them well for their next steps.

“I’ve had some incredible teachers who really taught me a lot,” she said. “Always there to debate an issue or just talk; always being supportive.”