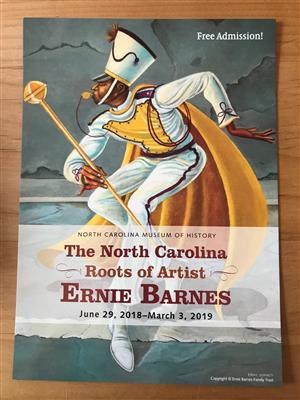 We are very fortunate to have the opportunity to delve deeper into the works and life of Ernie Barnes (1938- 2009).  Durham native Earnie Barnes was both an amazing artist and athlete.  Barnes had a successful NFL career playing for the Baltimore Colts, Titans of New York, San Diego Chargers, and the Denver Broncos. He was often fined for sketching during team meetings!  One of those sketches sold years later for $1000!  Barnes always thought of himself first as an artist and then as an athlete.

Barnes was nicknamed "Big Rembrandt" by his Denver teammates

He and Rembrandt shared the same birthday

He attended NCCU, majoring in Art on a full athletic scholarship

I knew his work from the 70s TV show "Good Times".  Producer Norman Lear commissioned Mr. Barnes to create the paintings the character J.J. used in the show.  Comedian Eddie Murphy owns the original "Sugar Shack" painting by Barnes. This painting is seen at the open and closing of the show (seasons 4 & 5).  It was also used as the album cover art for Marvin Gaye's 1976 album "I Want You."

YOU can see this work and more at our NC Museum of History, downtown Raleigh.